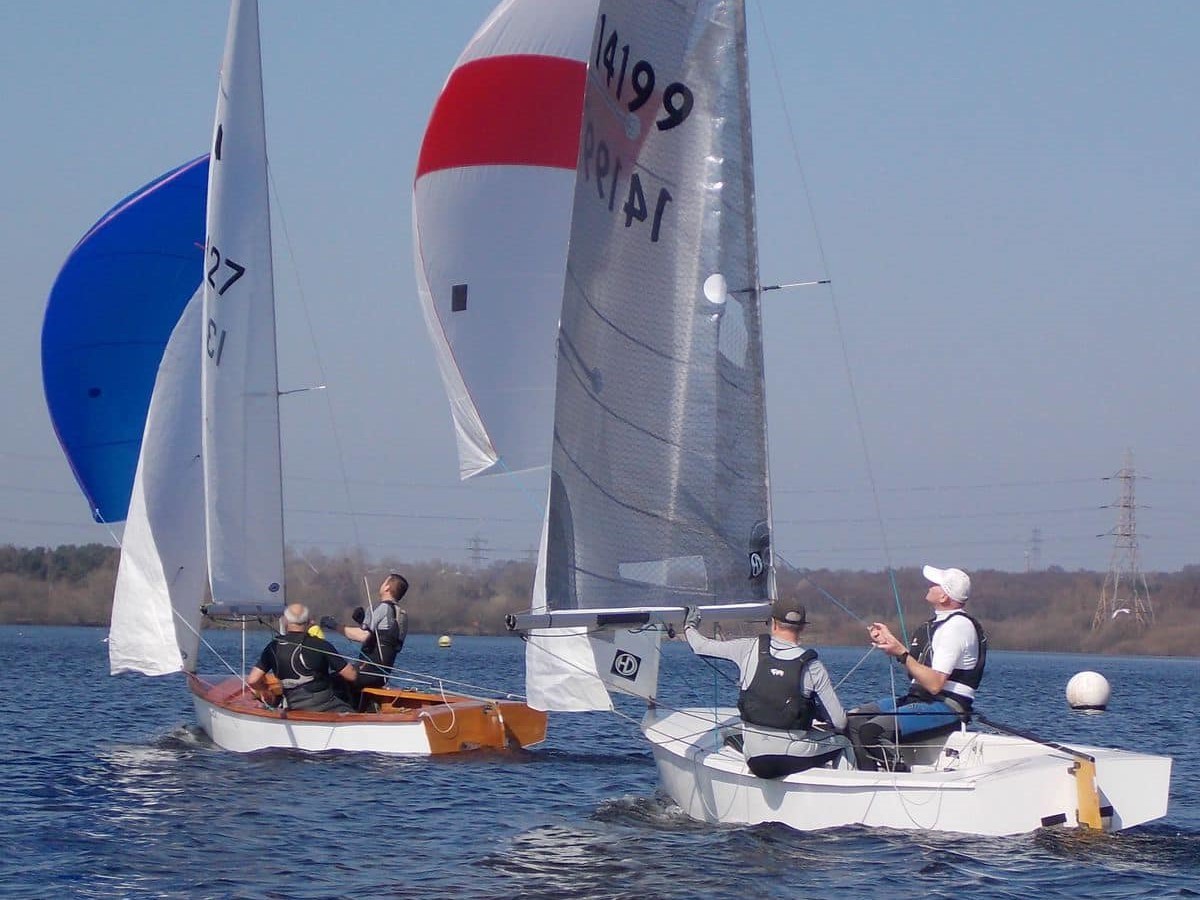 The GP14 championship season got underway this weekend with the Midland Area Championships at The Chase Sailing Club in Staffordshire. With two of the registered boats out due to covid 14 pairings arrived on Saturday morning to be greeted by blue skies, sunshine and a decent F2 breeze. The gold fleet entry promised for some close competitive racing and the event did not disappoint.

As the competitors rigged their boats on the foreshore a forlorn Ian Dobson was lacking anything to rig as crew Andy Tunnicliffe who was bringing the boat missed the start of the race. For the rest they started by the powerboat club with the wind blowing easterly. The fleet set off with a good intent of close racing as the front two boats of Graham Flynn/Frank Nickless (Chase SC) and Justin Jones/Chris Anderson (Chase SC) had a good back and forth throughout the race before Graham and Frank took the first win of the day.

By Race 2 Ian and Andy were on the water and chomping at the bit with their first bullet of the weekend. Ollie Goodhead and Connie Booth (SSSC) had a good race with their best placing of the event in 4th, Justin and Chris second again and Graham and Frank having to settle for 5th place.

Race 3 was once again very competitive, the wind having built by this point to a F3 it was champagne sailing. Graham and Frank lead for two laps before Ian and Andy got through to take the win. This race also provided a 'should have gone to Specsavers' moment when Neil Davies (Chase SC) thought he had finished in 7th place but hadn't actually crossed the line thinking the boat in front's hooter was his gun. Once he had turned back they finished in 10th place, in her first time crewing a GP14 I am sure Elsa Minton learned a lot from Neil this weekend!

Throughout the day the front half were tightly packed with a small gap and then the tightly packed second half of the fleet making for a good spectacle for those watching from the shore. With Ian and Andy carrying the first race DNS this left Graham and Frank the overnight leaders.

With the majority of the gold fleet at the evening's social there were many a whispered 'let's get him another pint so he's hungover tomorrow'. Unfortunately they all seemed to be buying each other an equal number of pints with the net impact being that they would all be equally as regretful the morning after. None more so than the Marine 13 mannequins in the club house who after taking a turn around the dancefloor with Justin and Chris then ended up in a compromising position by the bar. With the band finished and the chips strewn across the wet room (see first point re number of pints!) gathered up a lively and successful social came to a close.

Day 2 was a little chilly to start but still perfect sailing conditions for a March event. The wind was once again East/ENE and R5 started with F2 breeze, the start lines for the day once again by the powerboat as the competitors beat towards the top corner.

Race 4 started as Race 3 ended for Neil Davies, with a lack of awareness of the line and the only UFD of the race. Ian and Andy got a bullet with Graham and Frank second and the tussle between Nick/Kate and Fergus/Jasper for third saw the former edge it.

Race 5 had to be abandoned and re-started due to a drifting mark and with no one testing the line this time all were away clean. The front five were close again with places changing hands but another win for Ian and Andy.

Race 6 had a number of mini battles to be settled and with Graham and Frank UFD it provided the perfect opportunity for Nick/Kate and Fergus/Jasper to settle who was going to finish third overall with it coming down to the last race. After some close racing Fergus and Jasper finished second giving them enough to take third overall with Nick and Kate third in the race and Adam Froggatt and Izzy Tate (Chase SC) getting their best result of the event with a fourth.

Throughout the weekend the fleet were tightly packed in clumps with all competitors putting in a good showing from the ever improving Trimpley travelling boats enjoying a good tussle at the rear of the fleet to the fight for the fleet prizes in the middle. For Race 6 the Bronze Fleet prize was all but sealed by Cath and Rob which was lucky for them as they were a bit trigger happy and UFD. With home sailor Neil Davies in the silver fleet having done his best to sabotage himself it was left to the visiting Wembley/Welsh Harp and Staunton Harold boats to fight it out.

For Ian and Andy the sailing cobwebs were well and truly blown away, all three races they had their moments of being pushed by the rest of the top five but by the end of each race finished with a healthy lead. Graham and Frank also showed great consistency and a solid start to their worlds prep.

Thanks to series sponsors Craftinsure and Robline and event sponsors Marine 13 there were plenty of prizes for entrants. Winners of the Gold Fleet and event were Ian Dobson and Andy Tunnicliffe (Burwain SC), second overall and first club boat were Graham Flynn and Frank Nickless (Chase SC) and third were Fergus and Jasper Barnham from Snettisham Beach. The Silver Fleet was won by M Cleal and Romak (Wembley/Welsh Harp SC) with local sailors Cath Grove and Rob Slack (Chase SC) winning the Bronze Fleet. OOD Alex Walton did a fantastic job with the courses all weekend and thank you to all the many volunteers that made the weekend a great success.