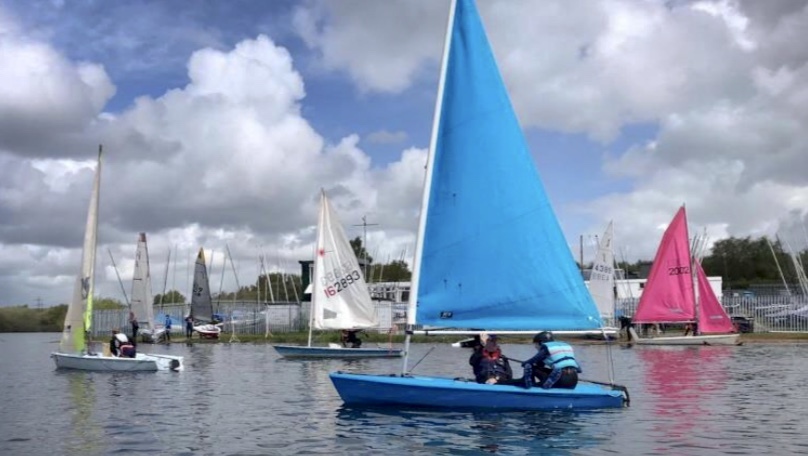 You may not know it but since May 2019 and operating largely under the radar, one of our club members Russell Lutwyche has encouraged a growing group of young and novice sailors to gather together on a Sunday to take part in what became known as "Rookie Racing".

AKA "The Rookies" initially Rookie Racing was Incepted to attract primarily the youngsters finishing their weekend RYA sailing courses and to get them to advance their sailing skills in a very low intensity fun racing environment. The idea being that over time that they will embrace the sport aspect of sailing and ultimately feed into Saturday racing with confidence rather than nervousness and not feeling that they are only going to get in the way.

The races tend to be simple short 20-minute races starting at 12.00pm with 2 or 3 races taking place depending on the conditions, accompanied by a safety boat. Once complete the results are printed off so all can see how they've done, giving them knowledge of how the handicap system works, and leaving them keen to do better next time

Also intrinsic to Rookie Racing is the active involvement of the parents, so rather than sitting back leaving the kids to it, parents are actively cajoled and encouraged to support what is going on. To that end they get involved with boat preparation, safety boat duty and even getting to grips with the race computer performing OD duties with 5-minute countdowns and timed race finishes.

The other growing part of The Rookies success is the availability of club boat hire organised by Rob Slack which has really encouraged and facilitated those new to the sport enabling them to get onto the water without having to initially buy kit. This enables Rob and Russ to link this up to work within Rookie Racing.

Over time The Rookies have really come on, regularly turning up to race each Sunday even right through the winter months with 8 to 14 boats being not unusual. The other snowball effect is that it's also attracting interest from other less regular sailors who also prefer the informal approach to racing on a Sunday to practise their sailing skills.

The only disclaimer that needs to be mentioned is that Rookie Racing is a self-organised group of club members getting together for what is in effect some unofficial collective sailing/racing and isn't a formal club offering. For this reason, Russell is always keen to remind everybody that just as in any social sailing situation that you must ultimately take responsibility for yourselves and your children, be able to self-rescue and not to sail in conditions that are beyond your capability.

Russell and Rob tie everything together in a WhatsApp group called Rookie Racing so for those wanting to join in the fun racing please feel free to contact them.